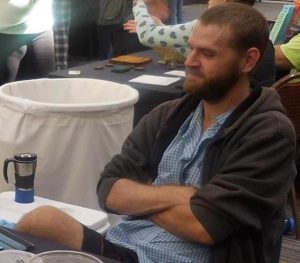 Bradley Wilson has been fascinated by the oft-overlooked newt since he first heard of such a creature in a Monty Python movie his father showed him in the early 1980’s.  His parents home quickly became filled with aquariums and terrariums.  Freshwater community tanks, oddballs such as the now outlawed fish Snakeheads, lungfish, freshwater toadfish, lionfish and moray eels. Saltwater tanks housing Volitan Lionfish, Tangs, Triggers and more moray eels.  Guinea pigs, teddy bear hamsters, ferrets, rabbits all made a home with him at one point or another.  At one point he owned a Cayenne river caecilian; which met an unfortunate end after escaping his home after a water change!Several years ago Bradley started keeping a pair of Chinese firebelly newts that bred for him.  Since then he has been breeding various species of  newts and selling them as pets with his small business Triton Newts.

« February ’17 Speaker: Cris Hagen from the Turtle Survival Alliance October ’17 Speaker: Beth Girard; Lizards: What They Do and How They Do It! »