Erica Hoaglund has worked for over 15 years with herps and other animals through the Nongame Wildlife Program of the Minnesota Department of Natural Resources. She covers Region 3/Central, which includes about 26 counties.

On May 6th, she spoke to the MHS about a new joint project with HerpMapper, aimed at putting community science to work documenting Minnesota’s only endangered amphibian, the Blanchard’s cricket frog. Her talk covered the frog’s status and history, phenology, habitat and ecology, distribution, how to identify the species, and a new citizen science survey seeking help from MHS members. 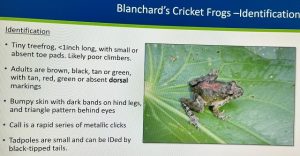 Blanchard’s cricket frog (Acris blanchardi) is Minnesota’s only endangered resident herp. (Although the massasauga is listed as endangered, this rattlesnake is not thought to actually be present in the state.)

Blanchard’s cricket frog was recently elevated to full species status. It is probably a “boom and bust” species, with years of plentiful reproduction alternating with “bust” years.

There was a sharp decline in the frog’s populations across the Midwest in the 1980s.That may have happened due to a perfect storm of habitat loss, climate change and disease (including chytrid fungus). The frog was added to the endangered list in 1996—with just one or two populations left in the state.

Blanchard’s cricket frogs are tiny tree frogs, less than an inch long. Their toe pads are small or absent, so they are probably poor climbers. Their color is quite variable. An adult’s base color may be brown, green or tan, with dark black, red or green dorsal (back) markings.

The frog’s skin is bumpy, with dark banding on the hind legs and a dark triangle pattern between the eyes. Tadpoles are small, with black-tipped tails.

The frog’s call sounds like a rapid series of metallic clicks or like pebbles knocking together, increasing in speed. Biologists clicking pebbles together in the right pattern can encourage frogs to respond.

In April or May, depending on the temperatures, adults usually emerge from hibernation and move to breeding areas. In June or July, breeding is stimulated by temperatures and precipitation. Recent rain and warmth lead to reproduction. Hot, humid nights are when the DNR typically goes out to survey the frogs.

Eggs (400+) are deposited singly or in small clusters and may be attached to the bottoms of lakes and ponds, or to emergent and floating vegetation. In August there is an explosive emergence of newly metamorphosed frogs. They move onto shorelines where they may cluster in great abundance.

In September or October, surviving frogs move to their hibernacula for hibernation. The average age of an adult is just one or two years. Most that hibernate in the fall were hatched in that same year.  They hang out near the hibernacula when it’s warm, and duck inside when it’s cool.

From mid October to April, the frogs hibernate. If there’s a big warm-up early or late in the winter, some may come out of hibernation, and then go back in, bouncing in and out. The overwintering phase is hard on these frogs. It is believed that less than 5% of them survive the winter! This is likely due to the species’ confusing and specific overwintering approach.

They prefer stiller water (such as river backwaters and ponds) for breeding—and flowing water for overwintering. They don’t seem to require emergent vegetation (such as bull rushes or lily pads), but will use it if it’s present.

They are able to quickly adapt to new habitat and have been found colonizing “new” water (that recently appeared) over a mile from the next nearest occupied habitat.

Surprisingly, the frogs don’t require clean, clear water or high dissolved oxygen as many amphibians do. They may occupy low-quality water locations. They don’t require a fishless breeding habitat, which is unusual for frogs (because fish eat their eggs). Cricket frog tadpoles know how to hide if predators are present. The frogs seem to have an affinity for habitat with unvegetated bottoms of mud, gravel and clay.

Cricket frogs have been found breeding in less than optimum places such as a flooded gravel pond at the bottom of an active gravel mine, and a pond in a grazing pasture with a lot of cattle activity.

But seasoned biologists have really been floored by the frog’s overwintering approach.

In Minnesota, most frogs and toads go into the water for the winter where they can float or tuck down into the mud. They are not freeze-tolerant and would die if the water froze solid. Freeze-tolerant species such as tree frogs and wood frogs overwinter terrestrially; they come out of the water and hide under bark or piles of leaves, freezing solid.

Blanchard’s cricket frogs overwinter terrestrially, but they are not freeze tolerant. They typically pick small cracks, crevices or holes in exposed soil by flowing water, which are formed by the sloughing of river banks. They seek out cracks or crevices that are right at the water line and have very narrow openings, with enough moisture or humidity that it buffers them from completely freezing.  The frogs often overwinter in groups in a good crevice (which is not very deep). They pick south, west and east facing river banks, probably because those warm up earlier in the spring.

The frogs cannot stand being underwater for more than 48 hours yet they need to stay damp, and cannot freeze. They have a very narrow window of habitat! Their specific needs contribute to their poor winter survival.

They also require a matrix of habitat types that they must be able to move between (so there can’t be major barriers between them): ponds or river backwaters for breeding, possibly adjacent uplands for the active season, then banks by flowing water for overwintering.  This is one of the reasons that the Blanchard’s cricket frog is so rare.

Currently, the frog seems to be recovering or in a boom cycle. Its range has been expanding and changing since around 2017 or 2018. Known populations seem to be colonizing new habitat, sometimes a couple of hundred meters away from their previous location. This has been noted Midwest-wide, not just in Minnesota. No two species range maps from different sources line up anymore.

Members of MHS can help detect, monitor and protect this endangered species. The DNR needs assistance to locate the frogs as they quickly expand into places where they haven’t been for decades—or ever.

As part of a new project, they are asking MHS members to go to locations where the frogs breed and listen for their calls. (Remember that endangered animals cannot be handled or harassed, only observed and photographed.)

At the MN Cricket Frog Survey website (acris.mnherps.com)—note that the site and survey details are still being finalized—there is a map showing locations where biologists think there may be cricket frogs. These “potential” frog sites include helpful notes about location, such as access and where to park. People can also select likely sites on their own to listen for cricket frogs.

On the Survey website, there’s information on how to download the smartphone app powered by HerpMapper. Frog calls can be recorded in the app and photos can be included. Add helpful notes. Was the GPS accurate? Was there one frog or a whole chorus?  Were there any other species present?

If no frog is heard, record that as well. (Example: “I checked this pond. It was great weather. No cricket frogs were calling.”) That’s valuable data, too.

The best time to search for cricket frogs is late May through mid July, from sundown to midnight. Conditions are ideal when humidity is high, there has been a recent rain, and nighttime temps are over 70 degrees.  Avoid cool, windy nights or heavy downpours.

This survey will provide critical data to expand knowledge of the species in Minnesota and help protect local populations from destruction or degradation.  It also supports opportunities to manage habitat for Blanchard’s cricket frogs, so they remain in Minnesota for future generations.

Lots of Minnesota rivers are used commercially and managed aggressively—and the cricket frog is at risk because of this. The Mississippi is dredged regularly, and what is pulled up from the bottom may be piled in places where there could be cricket frog habitat.

Pay attention to what is going on in the state. Minnesota has an environmental review process. The Environmental Quality Board produces the EQB Monitor, which tells people about big projects that are going on—and people can submit comments.

Even one comment can make a difference. Some herpers submitted a comment that there were cricket frogs where a development was happening and it changed the whole course of the development!

Anyone who knows or suspects that protected species are being impacted is encouraged submit a comment. Find the EQB Monitor at: https://www.eqb.state.mn.us/eqb-monitor.

Once the survey is completely ready to go, they will send an email with detailed directions on how to participate.

Hoaglund plans to host meetup evenings around the metro area where participants will be able to listen for frogs and get help with the new app. She will pick places where people can hopefully hear the frogs. It will be exciting to see people in person again.